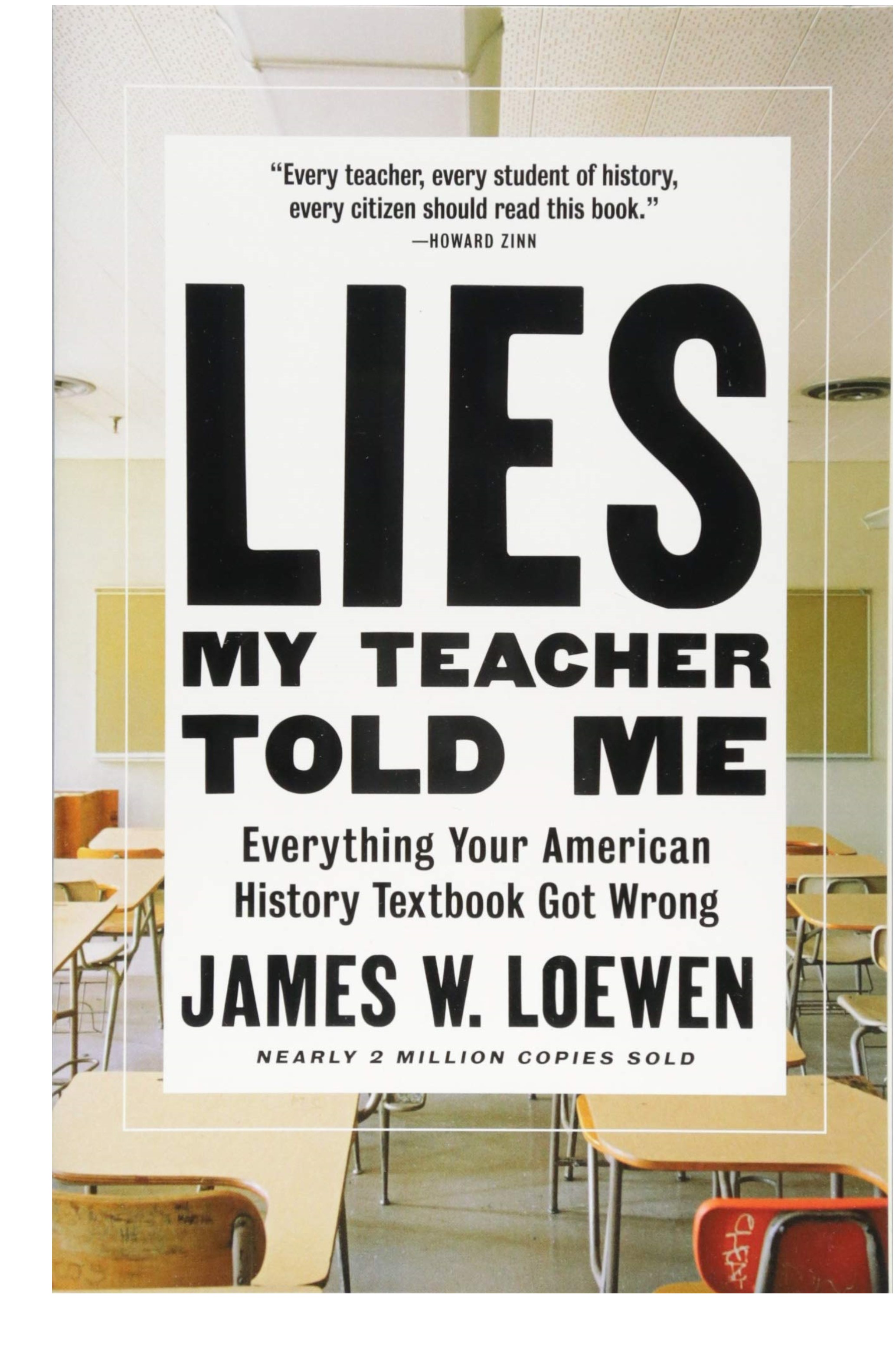 “The proper response of a white American male is to work out a theology of repentance.”  It was the response of Dr. John Deschner, a seminary professor at Perkins (30+ years ago), on the other side of my asking about where I fit into the environment of the various [Black, Hispanic, and Feminist] Liberation Theologies we’d been discussing.

My initial response was defensiveness.  (And it lasted for quite a few years.)  “Okay,” I told myself, “I’ll repent of the ways I’ve been on some kind of high horse – so long as ‘they’ repent of the ways they’ve failed or refused to get on any kind of horse at all!”  Yes, a bit harsh.  I am embarrassed to admit those words now.  Still, I have to be honest about my journey.

Deschner’s words came back to me amidst a re-reading of James W. Loewen’s Lies My Teacher Told Me: Everything Your American History Textbook Got Wrong (1995).  Early on, he posits the process of “heroification” as the “degenerative process (much like calcification) that makes people over into heroes. Through this process, our educational media turn flesh-and-blood individuals into pious, perfect creatures without conflicts, pain, credibility, or human interest” (p. 9)  Though I am barely into it, already I’ve been challenged (again) by real(er) portraits of Woodrow Wilson, Helen Keller, Christopher Columbus, and the Europeans who “discovered” and “settled” the Americas.  Already, though I have only engaged the first few chapters, there’s an awakening to the ways that U.S. history has for too long been “white-washed” (and “male-washed”) by the textbook writers of American history.  Here, there’s the obvious corollary to the “Golden Rule” (that those who have the gold get to make the rules): that the winners of history get to write that history.

Of course, U.S. history is not the only arena for heroification – and the call to repent.  Just a few weeks ago, Franciscan Father, Albert Haase, addressed a group of us, here at St. Anthony’s Catholic Church in Bryan.

“Holiness is a process we are constantly working on.  It doesn’t mean we’re going to be perfect.  I had the great privilege of meeting Mother Teresa of Calcutta.  There’s no doubt she was holy.  She’s now canonized.  But you know what?  Let me tell you something about my dear Mother Teresa.  She had one major character flaw that she could never overcome.  She was rigid and hard-headed.  It was either her way or the highway.”

It was his way of underscoring that…

“Holiness is not about being perfect.  You’re still going to have your problems and struggles.   But, you are – we are—going to be transformed.  It’s a lifelong process.”

It all has me revisiting, as I have suggested, Deschner’s challenge—in a much deeper and heartfelt way.  Gone is the self-justification of former days.

As I lay Loewen on the nightstand the other night, I was struck by a profound sadness.  “Yes,” something said from deep within.  “Yes, a theology of repentance is in order – for all the ways that I and my kind have (consciously and unconsciously) perpetuated a defense of and rationalization for the ways things are (over and against the ways things should be).”

It’s a sadness which I feel not only as an American citizen and a citizen of this world.  It’s mine, as well, as a citizen of God’s Kingdom – for the ways I have ever perpetuated a story of transformation and Sainthood that is, sadly (and falsely), out of reach and unattainable and unbiblical.

One thought on “Working Out a “Theology of Repentance””