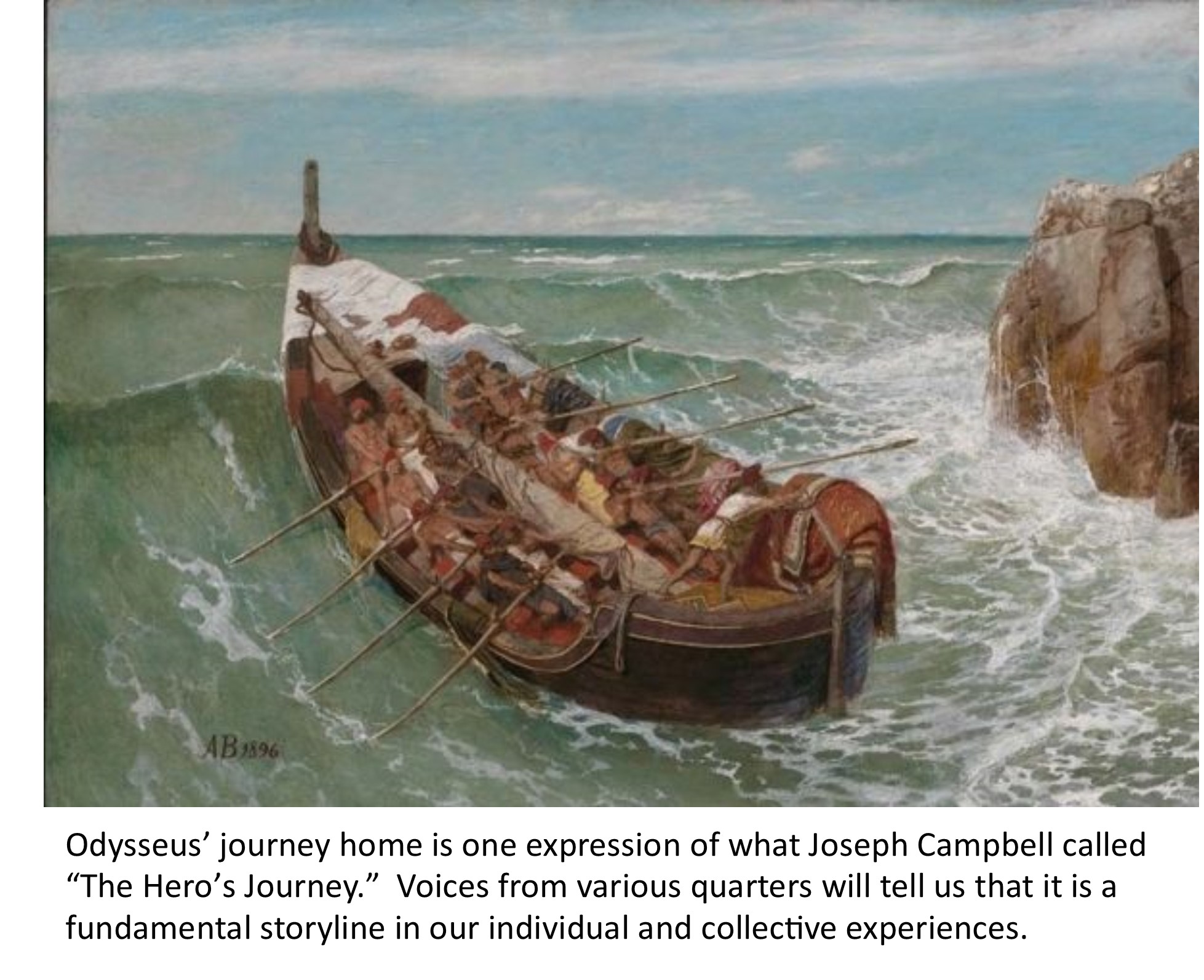 At the intersection of the Enneagram and my love for great movies-stories are books like Michael Goldberg’s Travels with Odysseus: Uncommon Wisdom from Homer’s Odyssey. (Kathy came across it in a discussion last week while about advanced Enneagram training with Jerome Wagner and Kathryn Grant in San Francisco.)

Goldberg suggests that each of Odysseus’ stops on his way home is an encounter with one of the Enneagram personality styles – in reverse order. He spells this out a little more precisely, in fact, in his book, The 9 Way of Working: How to Use the Enneagram to Discover Your Natural Strengths and Work More Efficiently (p. 340):

The Enneagram styles are very old. Homer (ca. 750 b.c.e. ) knew the nine basic themes essentially as they are today. Odysseus travels through each of the Enneagram domains in exact reverse numerical order [beginning with type 2 and working counterclockwise around the enneagram]. Here is his itinerary:

2. Calypso, the Two nymph who offers Odysseus every worldly good and even immortality if he will but stay with her.

1. The Phaeacians, perfect Martha Stewart One hosts, where honor, respect, fair play, and courtliness count most, along with beautifully prepared meals.

9. The Land of the Lotus Eaters, dreamy, forgetful Nines.

8. The Cyclops, powerful, vengeful giant Eights; “Each one dwells in his own mountain cave, dealing out rough justice to wife and child, indifferent to what others do.”

7. Aeolia, a Seven island that floats whimsically on the sea, relocating with the wind, where the Seven residents feast and party.

4. The visit to Hades, the psychic underworld. The Sirens, Fours who bewitch passing mariners to tragedy with melodious song.

3. Scylla and Charybdis, a monster and a whirlpool, a rock and a hard place, where skillful sailing full speed ahead is the only way through. The conversion of the precious golden Cattle of the Sun.

It’s not the first grand epic that scholars have connected with the Enneagram, by the way. There’s a pretty lively discussion out there, for example, about Dante’s engagement of the Enneagram in his Divine Comedy – not to mention a host of more contemporary articles on the value of the Enneagram for Hollywood script writers.  (Like Campbell’s “Hero’s Journey,” the Enneagram appears to be a pretty standard go-to.)

All that seated, what really caught my eye and heart was Goldberg’s review of the Illiad and the Odyssey in his Introduction:

The story before [the Odyssey] is the bloody Trojan War, a 10 year struggle over the most beautiful woman in the world, named Helen. She was married to King Menelaus of Sparta. But Paris, Prince of Troy (Ilium in the Greek), spirited her away (with her consent or not, we can only wonder, since versions differ).

Menelaus gathered his fellow Greek kings to fight the Trojan War for the return of his queen. The Iliad recounts the events in the last year of that 10 year war – it was 1184 BCE – when the Greeks finally win and Helen returns with the triumphant Menelaus to Sparta.

The Iliad’s warriors venture out to do battle; they win conquests and recover from defeats. they build their egos and test their powers. They are generally not shy about demanding their way or asserting their will.

The Iliad is about devising strategy and taking action, about fighting for what you want against others who want it too; it is the story of how to (or how not to) make your place in the world. (Travels with Odysseus, p. 12)

Homer’s Odyssey is the great story of homecoming.

Since ancient times, The Odyssey has been known as the journey that each of us – having been out and about, struggling one way or another, pretending to be this and that – must take to return home, to who we really are and what we are supposed to become.

On his long odyssey, Odysseus gets sidetracked, distracted, waylaid. Some truths he learns easily and others he resists. He meets magical and powerful beings who can help the journey along or cause disaster. Some see who he is in his heart and help him, and bring him insight and attainment. Others – aggravating and difficult strangers – try to do him in.

In all of this Odysseus is not so different than the rest of us. (Travels, p. 9)

And there, it hit me. I suspect I’d heard it before – in and through, say, Richard Rohr and Joseph Campbell. But, here it really hit home:

It’s another way of framing our mission at Zoe-Life Explorations:
“Companioning with others


in our common [spiritual] journey
of returning home.”