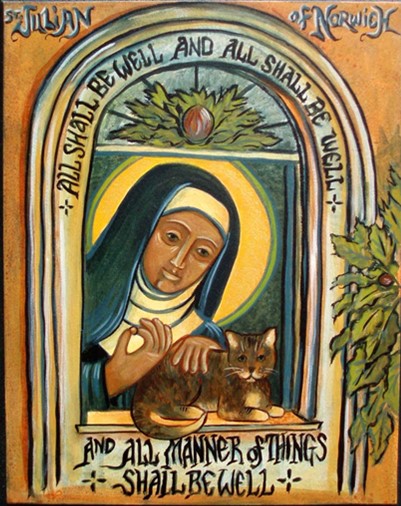 Icons of Julian will often feature her holding a hazelnut… and/or her cat.

Today, May 13th is celebrated as the feast day of Julian of Norwich in the Roman Catholic Church – May 8th in Lutheran and Anglican churches. 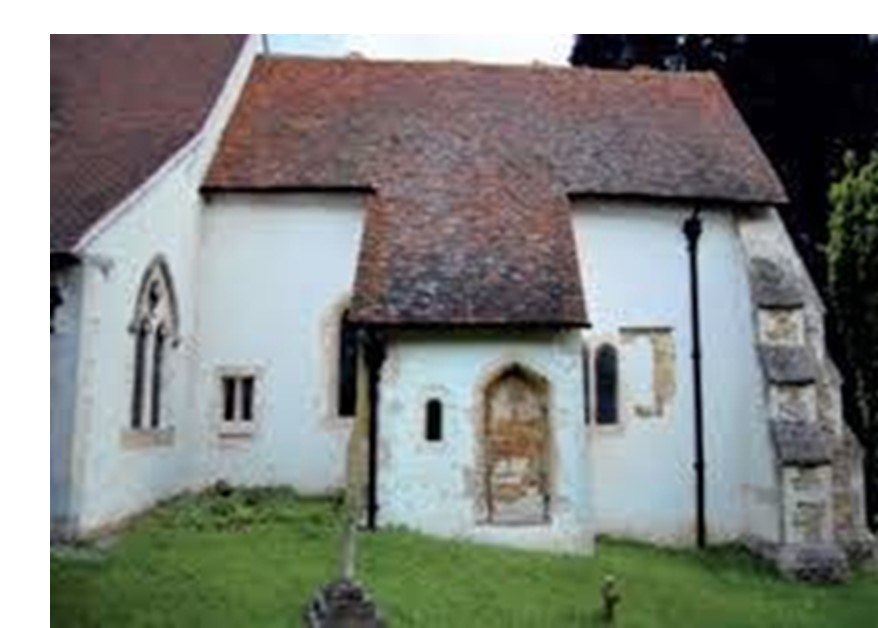 As an “anchoress,” Julian would have lived in an anchorhold like this one — a cell-like dwelling, attached to a church, in which she could live a solitary life dedicated to intense prayer and spiritual practice.

Julian was a lay woman who, in the 1300’s, dedicated herself to God — choosing a life of prayer and meditation as an anchoress.  Entering such a life was marked by a community dedication on the day the individual was enclosed (boarded up) in a tiny addition to a church building.  Access to the anchoress (or anchorite, when a man) was gained through a small window (a “squint”) through which they received Holy Communion, gifts of food, and prayer petitions from the public.  Sometimes the cell had a door which had access to a small garden.  It was customary for the resident to be given a cat to help control mice.  Julian was known to be quite fond of her cat and, in religious art, is often depicted with her feline friend.

Julian lived in an anchorhold (like the one pictured, above) for over 25 years.  Her squint opened onto a busy road in Norwich, a seaport town, and her spirit and grace and wisdom were such that her window became a popular destination for those who sought prayers and/or spiritual counsel.

Julian lived during a challenging era in England.  The Black (or Bubonic) Plague swept through Asia and Europe in waves.  Peaking in 1347-1351, outbreaks continued to ravage the continent for several centuries. Overall, the Black Plague caused the death of 30-60% of the population (far exceeding the devastation of the CO-VID 19 pandemic) and decimated economies. It is in this environment that hopeful, faithful, and deeply loving Julian thrived as a spiritual light in eastern England.

Julian was gravely ill, thought to be on her deathbed, when she experienced extensive spiritual visions.  These are recorded in The Revelations of Divine Love which is thought to the be the first surviving manuscript of a woman in the English language.

Her most often quoted writing is “All shall be well, all shall be well, and all manner of thing shall be well.”  In what she called her “showings,” these words were said to her by Jesus as she implored him about why sin was even allowed to exist in the world.  Jesus replied (and Julian notes that this was “said most tenderly”) that it was necessary to allow for sin “but all shall be well…”

Reflecting on these words and their larger context, one overhears three great truths for us, today:

First, All shall be well leaves room to acknowledge that things are not always well.  Certainly, during our days of sheltering-at-home and a virus that puts our people and economy at risk, ALL isn’t well.  (Isn’t it uncanny to realize Julian experienced an even more devastating pandemic?)

Second, notice Jesus “tenderly” answered Julian’s challenging question about why sin was allowed.  Julian challenged her creator with how he created!  God does allow us to go “toe-to-toe” with God about what troubles us.

Encouraging to hear these same words being used in contemporary settings.  A dear friend’s son co-wrote the following song (and recorded it with his band, “Blue Water Highway”).  Theirs is the hope that Julian’s ancient wisdom can encourage us in our current situation.  (Click here if you’d like to overhear a little bit more about the story behind the song.)