I am no real veteran of the Labyrinth. Books on the phenomena dot my library.  But, they are practically untouched. “I’ll get to them one of these days.”

This is not to say that I am entirely clueless when it comes to identifying and even engaging this experience/practice. 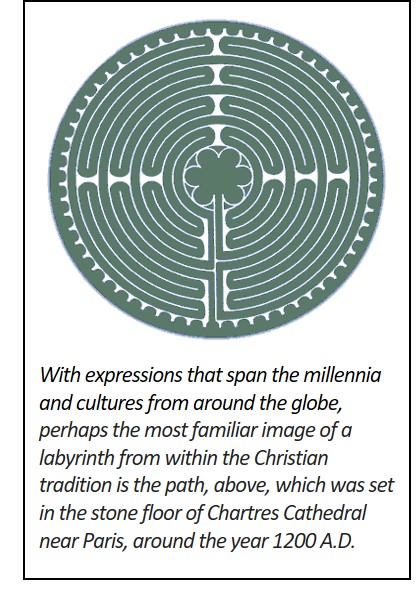 In an article entitled Walking a Labyrinth as Spiritual Exercise, Wendy Bumgardner gives definition to such pathways: “[In spite of appearances,] a labyrinth is not a maze. It has only one path to the center and back out, which is called unicursal (one line). It has no blind alleys or dead ends as mazes have. The path twists and turns back on itself many times before reaching the center. Once at the center, there is only one way back out.”  Bumgardner as well as others will further speak of the spiritual benefits which many experience through a slow, relaxed, meditative navigation of the physical path. Some practitioners will, in fact, report a sense of spiritual awakening and intimate communion with the Divine.

Across the years, I have overheard a variety of Christian responses to the Labyrinth—covering the spectrum.  On the one side are those who do speak to its power and value as a “means of Grace” and encounter and transformation with God.  On the other side, there are those who hold it with suspicion – as just one more incursion of New Age and/or Catholic practices into the sacred precincts of orthodox Christianity.

I guess I am somewhere in between.  (Though here, I am certainly not as cynical about it as one clergy person–who teased a labyrinth “fan” in his congregation: “Hey, I made my best time yet! I got to the center and back in 26 seconds!”)  No, not so suspicious or jaded on the one hand but certainly not one who’s had some kind of mystical encounter via the labyrinth (at least so far), I can speak to the ways the labyrinth “preaches” to me –being a pretty good parable or metaphor about the Christian life to which I am awakening…

More could be added (and will be, I suspect). It’s all enough to affirm a theme we’ve sounded before and will surely sound again: of how “Christ plays in 10,000 places,” of how “earth is crammed with heaven,” of how (for those who have eyes to see and ears to hear) parables and sermons abound all around.

O God of many paths,
I stand before this labyrinth today,
metaphor of my journey to you.

In the Western world
I have been taught that
“the shortest distance
between two points
is a straight line,”
and being an impatient person,
I am uncomfortable with waiting.
I have often modeled
my journey to you
on the straight line.

But you,
God of infinite patience,
have shown me
[that] there is another path,
a curved path.
On this path,
my anticipation is heightened
as I approach the centre,
only to be led out again
to the periphery.
[And] this path
more closely resembles
life itself.
On this path,
if I just put one foot
in front of the other,
it may seem at times
as if I am not approaching my goal,
while in fact, I am drawing closer
all the time.

But you are a God
of surprises and mystery,
and I don’t control the path.
The labyrinth is a symbol
of my surrender to
mystery,
trusting,
not knowing for certain,
that the path which curves in and out,
again ultimately leads to the Centre,
which is You.

–Jean Sonnenberg, “Prayer for a Labyrinth Walk”
(in the Washington National Cathedral Centre for Prayer and Pilgrimage)