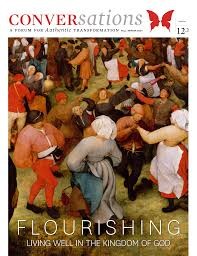 Through the years, amidst a variety of formation-related googlings, I’ve stumbled upon a variety articles from — and, in a few cases, entire issues of —  a now defunct periodical entitled Conversations Journal.

Found one such issue still out there via the oneLifeMaps website – focused on “Flourishing.”     I’m sharing it here to give you some sense of what Conversations was… and still is.  (As you engage it, note the rich diversity and depth of those who variously serve in editorial capacities… on page 3 of the pdf!)

Descriptors of the Journal still exist out there – like this one from the Dallas Willard Center for Spiritual Formation at Westmont College in Santa Barbara, California:

Imagine a table where representatives from each of the major tributaries of Christian spirituality can sit and talk openly and honestly about what matters most, authentic transformation into the life and character of Christ. That’s Conversations, and you’re invited to pull up a chair.

Conversations Journal was founded in 2001 and began publication in the spring of 2003. Its founding editors were David Benner, Larry Crabb, and Gary W. Moon. The publication was built, in large part, around the key spiritual formation ideas of Dallas Willard and Richard J. Foster. Throughout the journal’s history, there has been an attempt to hear from a representative of each the six “streams” (the great traditions of Christian faith) in each issue. The structure of the journal is built around Willard’s model of the person. The Martin Institute and Dallas Willard Center has collaborated with Richmont Graduate University to continue its publication.

Sadly, though, the journal was retired in 2016.  Various articles speak of back issues one can get.  But, like the Journal’s Facebook page (with its most recent post occurring in January, 2017), things are outdated – with dead ends abounding.  Yes, there’s a new site they’ve created [conversatio.org] which promises a release of back issues.  But, I could only find two such issues.  (Even then, they’ve been stripped from their journal format – being posted as a list of links to engage.  Nice to have the content, yes, but I sure do like the layout and “feel” of the old “magazine.”)

In one of those wild-haired moves, I did write editor, Gary Moon.  (Finding his email wasn’t easy!)  He informed me that “We plan on putting all back issues on the Conversatio site. The third of the 28 ‘books’ should be up this month. However, it’s a pretty labor intensive project, so I doubt we ever find a pace of putting up more than 4 to 6 issues each year.”

Yeah, a little disappointed.  As suggested above, I really like/liked the magazine “feel” of previous issues.  And then, there’s that rather adolescent emotion that “I want it all… and I want it now!”

There’s a spiritual formation lesson in all of this, to be sure.   It’s a recurring one, in fact, for me – going something like this: “don’t forsake what you need [and what’s readily available] because you aren’t getting what you want!”

In the case of Conversations, you see, Conversatio is proving to be a boatload of quality materials.  Already, the featured class on “Glittering Vices” – featuring significant sharing from Dallas Willard and Rebecca DeYoung, especially focused on anger – has prompted profound stirrings and prayers.  (No surprise to those who know me at all: but, when Young invoked Shawshank Redemption at key juncture, she had me!)

And the “vices” class is but the tip of the iceberg!  It doesn’t take much rooting around in the site to realize what a true mine Conversatio is!  Just take a look at the site’s index of media, exercise and classes!

Given the fate of its predecessor in print, my biggest concern, hope, and prayer for Conversatio is that it will not lack for the resources that are clearly necessary for it to be viable and sustainable for a much longer haul!

One thought on “Review: Conversations Worth Keeping”