In last week’s post (REVISTING “LIBERATION THEOLOGY”… AND REPENTING),  I made reference to a favorite passage from Justo Gonzalez’s Liberation Preaching—focused on what I’ve come to call “Lone Ranger spirituality.”

I thought I’d posted on it before but was surprised not to find it in the archives.  It do note that it was the focus of an article in the Pentecost 2020 issue of our quarterly-seasonal resource, Ruminations—focused on “Community and Spiritual Companionship as a Means of Grace.”

I first encountered it in seminary—through the writings of Justo Gonzalez as he bemoaned a certain type of “Lone Ranger Bible Study”: 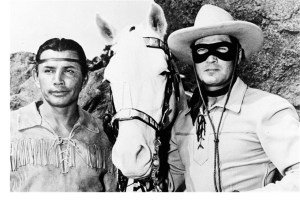 The Lone Ranger himself did not roam the West alone. He had Tonto with him. Tonto, whose name means “dimwit” [or fool], as any Hispanic in the Southwest would know. Tonto, who hardly ever spoke, except for an occasional, either enigmatic or meaningless “kemo sabe.'” And in spite of this the white hero was called “lone,” because his Indian companion, who repeatedly saved his life, simply did not count. (Gonzalez, The Liberating Pulpit, p. 50)

Admittedly, when I first read those words, I reacted (and I still can react) with a certain defensiveness: “The Ranger wasn’t that cold or curt with Tonto, was he?!”

However, even if the Lone Ranger wasn’t “that bad,” Gonzalez’s point is not to be lost—not just in regards to Bible Study, but the entirety of the Christian walk: that there are too many that conceive of the Christian life as an individual enterprise in which the value and necessity of others in our spiritual formation and health is downplayed or dismissed.

To be sure, it is one of those paradoxes I embrace.  On the one hand, I can entirely empathize with those who are disenchanted with and nauseated by organized religion.  To be honest, there isn’t a week that goes by that I don’t imagine walking away from some aspect of the Church as organized religion.  And yet, on the other hand, I believe, that there is “no salvation apart from the Church” – that there is no salvation apart from the loving relation-ships and community which God calls forth and inspires.  (The great commandments seem to be joined at the hip: loving the Lord our God… and [“like unto it”] loving our neighbor.) Yes, it’s just one more paradox in which one has to be very careful not to “throw the baby out with the dirty bath water!”