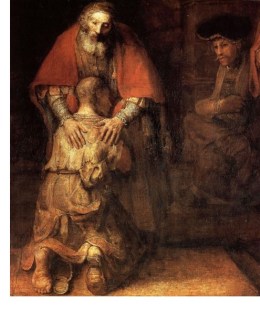 In a presentation on “The Life and Legacy of Dallas Willard,” Gary Moon shares two stories or narratives which impacted his (Gary’s) life.  Turns out, in fact, that he shares these two stories in his book, Apprenticeship with Jesus: Learning to Live Like the Master – seating them as options for viewing “what is, from the human perspective, the most important concept in Christianity.” (i.e., salvation)

I share them here for the ways that, at least from my experience, a migration from the first narrative to the second is not just Moon’s.  My personal experience/journey, my readings and studies, and my experience in working with souls in spiritual formation through the years: these have me viewing the first story as a first half narrative for many souls (especially here, in the Bible-belt South) and the second story as the narrative emerging on the other side of that clarifying passage which Janet Hagberg calls “The Wall.”

Read for yourself and tell me what you think… 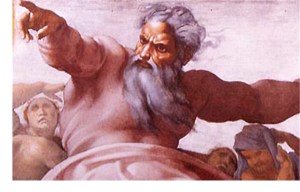 The First Story
In the first story God creates two naked people without belly buttons and places them in a garden.  It’s not real clear why he does this, but there is good news—they are naked (I may have already mentioned that) and their primary job is to be fruitful and multiply.

One day while taking a break from multiplying and naming the animals, the woman, influenced by a talking snake, tricks the man into taking a bit from an apple, and all hell breaks loose.  God is surprised and then becomes extremely angry.  He curses them, every dog, cat, rock, and leaf—the entire universe and each of the seven billion-plus and counting descendants who will follow.

Through many millennia God stews in his wrath.  He does write down a few instructions and occasionally sends a plague, prophet, or flood to keep folks in line.  But mostly he just sits around on a throne, looking a lot like Charlton Heston, and scowls down through the glass-bottom floor of heaven as he thinks up new ways to make humans behave.  Then finally, when he can take it no more, he sends his own Son to be tortured and then brutally murdered.

While there are a lot of theories about why God’s Son had to die, the bottom line is, it somehow caused God to feel a whole lot better about things and helped him to decide that anyone who hears about what Jesus did and says a magic phrase will once again get to live forever and enjoy paradise.  And for those who don’t say the incantation?  They will burn in flames for all eternity.  Don’t say the right words and your fate will be a more grotesque horror than what could be conjured up by a committee comprised of Nero, Hitler, and Ghengis Khan.

I never liked this story. 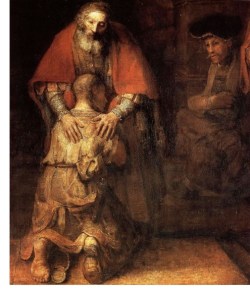 Story Number Two
In the second story God exists as a loving community of three whose relationship is so joyful, pulsating, and vibrant that it has been described as a dance.

God decides that this is all too wonderful to keep to himself.  So he creates an entire universe and tenderly places humanity at the center, like the offspring of proud parents brought home to a nursery.

Then God does something even more amazing.  He plants within the human heart a small but glorious piece of himself.  Under his watchful eye these two creatures are to grow into beings who will become as much like God as possible.  They are to join the dance, become partners with the Trinity.

But the very first two make a fatal decision.  They decide that they can live unplugged from the Tree of Life—the presence and energy of God—and can, in fact, be God themselves.

God is not surprised—he saw this day coming even as he was knitting them together.  You can’t surprise someone who lives outside the boundaries of time.  And he is not angry.  He does, however, become very sad as separation and the reality of free will play out before his eyes.

He sets in motion a series of plans to woo us back home, refusing to give up on his original plan to be a nurturing parent to his precious children, showing them how to grow their character until it mirrors his own.

Through the passing millennia God becomes the prodigal Father, standing by his driveway, straining his neck waiting for his children to come home.  He sends cards and letters, patriarchs and prophets with the same message: “Your inheritance is waiting; the promises can still be cashed.  Come home, I want to be with you, I want to teach you to dance.”

But when it becomes clear that we will not come home for longer than a brief visit, God can wait no longer.  He empties himself of divine dignity, and wades into the murk and sits down in the mire alongside his prodigal children—becoming as much like us as possible for a while so that we can learn to be like him forever.

Jesus brings the good news that the doors to the kingdom are open wide and that the Trinity still wants us to join the dance, to become as one with them as they are with each other.

And he inhales death and separation into himself and shows through the gruesome image of crucifixion what it looks like to freely die to all that is separate from the will of God.  And then he demonstrates through his resurrection that he knows what he’s talking about.

But that’s not all.  He sends the Holy Spirit with music and a dance chart so that we can learn how to waltz with the Trinity, even now, as we wait for the real party to begin.

For now, I will leave the postscript to Richard Rohr:

As Matthew Fox taught many years ago, Christianity’s contrived “Fall-Redemption” spirituality just keeps digging us into a deeper and deeper hole (my words!). We must return to our original “Creation Spirituality” for the foundational reform of Christianity. (from The Story that Defines Us)