12 The next day as they were leaving Bethany, Jesus was hungry. 13 Seeing in the distance a fig tree in leaf, he went to find out if it had any fruit. When he reached it, he found nothing but leaves, because it was not the season for figs. 14 Then he said to the tree, “May no one ever eat fruit from you again.” And his disciples heard him say it.
15 On reaching Jerusalem, Jesus entered the temple courts and began driving out those who were buying and selling there. He overturned the tables of the money changers and the benches of those selling doves…
(Mark 11:12-15)

At first, it can seem rather capricious , somewhat erratic on Jesus part: “he went to find out if it had any fruit” for “it was not the season for figs.”  Sit on it for a little while and it can strike real terror: “You mean Jesus could possibly look at my life and judge me along those same lines–expecting things when the time isn’t right for those things?!?!?”

Here, my work in Hold Land studies with Dr. Jim Fleming helps a lot.  Fleming teaches that, while the Greek had but one word for the fruits of a fig tree, the Hebrew distinguished between a “first fruit” and “latter fruits.”  Phagee: the early, first fruit [bitter to the taste but nonetheless edible] is what one horticulturalist has referred to as the fig tree’s “bloom.”  It is to be distinguished from the later seasonal fig the Hebrew will distinguish with another word.  To be sure, there is a connection between the two: where there is no phagee (no spring blooms), there is no hope of any latter fruits to come.

For our immediate purposes, though, this distinction helps illuminate the difficult passage before us.  Per Fleming: Jesus is hungry; he searches the fig tree (here in the Spring at Passover time… looking for phagee); though the tree was full of leaves, there was no phagee to be found—“for it was not the season for figs.”  Gone, then, is a lot of the confusion over Jesus’ disgust with what we might think of as an otherwise “innocent” fig tree! 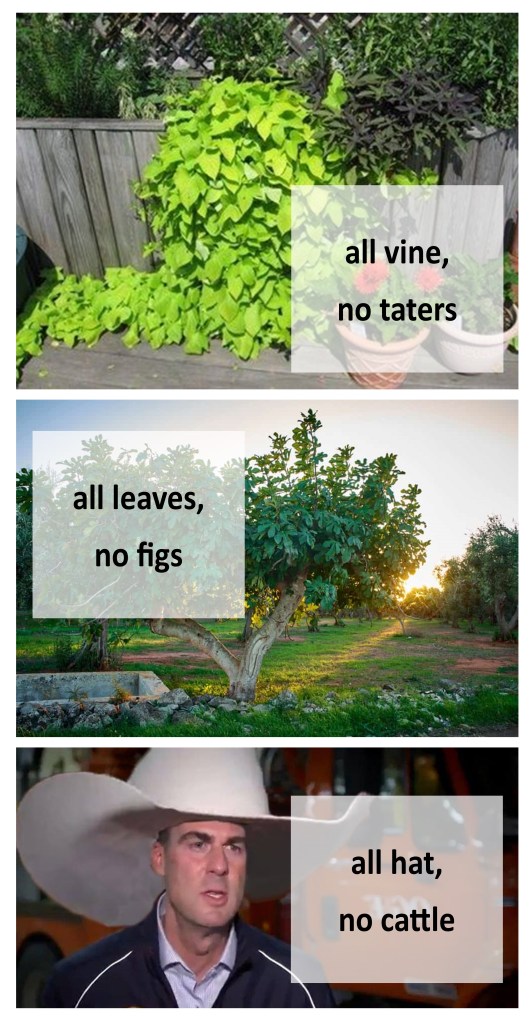 My concern and focus shifts—for us, as individuals and as a faith community (in this Lenten Season and beyond) to the “moral” of this story.  It’s a moral, in fact, that is reinforced by the passage that follows it—where Jesus cleanses the temple.  Here again, there’s a lot of activity (a lot of outward foliage) to suggest vitality, but… there is no fruit bearing, there’s nothing which offers life to a starving world. “All vine and no taters,” as Bill Hinson would say.  (Or, as they said of wannabe cowboys in one rural community I served, “all hat, no cattle.”)

Living things are created to share life.  Taking up space and sucking precious life from the earth just won’t do.  Apparently, the God revealed in Jesus is concerned with much more than outward show.  Clear in his actions here (and his words elsewhere) is that Christ is adamant about things living up to their full purpose and identity—which, for human community (like a fig tree) means bearing real, life-sustaining  and life-conveying fruit! (cf., Matt. 7:16; John 15:1-8)

Which brings me to my question—or, more appropriately, my prayer–for myself… and for all of us in this Lenten Season (and beyond).  A lot of activity fills our lives and community.  Holy Week and Easter can bring additional things to do.

Forbid, O Lord,
that we should become so consumed and preoccupied
with ‘leafy’ busy-ness and activity
that we should neglect a regard
and heart
for the deeper fruits
of real life and living!